All That Perishes at the Edge of Land: a film by Hira Nabi 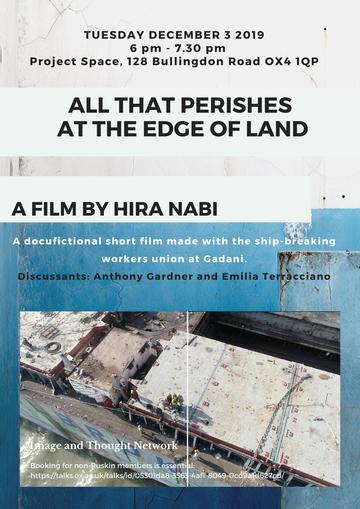 Hira Nabi is a Lahore-based writer/director and cinematographer. Her work explores repositories of memory in urban landscapes, contested or imagined histories, labour and struggles around the built and natural environment.
Where do ships go to die? All That Perishes at the Edge of Land is filmed at the Gadani ship-breaking yard in Baluchistan, where condemned vessels are beached and taken apart by men.
This film considers the industries built around collapsed vessels as the site of contextual inquiries: destruction of marine ecologies, exploitative labour practices affecting migrant labourers, networks of industries aggregating wealth, and the disposal of waste in the Global South.
Please register for the film screening here.
This film screening is part of the Image and Thought Network, TORCH, The Oxford Research Centre in the Humanities.
https://www.torch.ox.ac.uk/images-and-thoughts
Images are often considered as playing an auxiliary role in the process of thinking, having an explicative rather than a heuristic function. The aim of the network is to consider the relationship between image and thought across disciplines, time frames and cultural traditions; in particular the project crosses philosophy, art and art history, literature and literary criticism, and theology and religion studies.
Doors open at 6:00pm, and the film screening begins at 6:30pm.