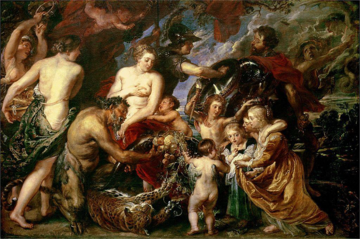 Gender may not always be the first topic that comes to mind when discussing international relations, but it has a heavy bearing on diplomatic issues. It surfaces regularly in the news, whether in the 2015-2016 controversy over the Vatican’s refusal to accept a homosexual ambassador from France, or in 2017 with the first group photo of NATO spouses to include a male leader’s husband. Scholars have not left this field of research unexplored, and a recent collection of essays edited by Jennifer A. Cassidy examines in depth the gender dynamics of twentieth-century diplomacy. But what was the situation like in the early modern world?

While ambassadorial positions were monopolised by men, women could and did perform diplomatic roles, both officially and unofficially. From heads of state like Elizabeth I and Catherine the Great to salon hostesses receiving diplomats from abroad, from the Paix des Dames signed by two royal women in 1529 to Lady Mary Wortley Montagu’s journey to Constantinople, women appear regularly in diplomatic contexts. Nor were gender performances always normative during this period, as shown by the eighteenth-century transgender ambassador, the Chevalier d’Eon. Literary and artistic masterpieces celebrating the signing of peace treaties, moreover, often give a prominent role to the female figure, thus questioning the assumption that the world of diplomatic negotiations was entirely male-centred. After all, certain ideas that are normally linked to masculinity, such as

The TORCH Network on Diplomacy in the Early Modern Period proposes to continue this line of inquiry re-examining the interplay between gender and diplomacy in the early modern world at a two-day symposium in Oxford on 11-12 June 2018. We invite papers on topics including (but not limited to):

- Methodologies for studying gender and diplomacy;

- The role of women in diplomatic ceremonial;

- Performances of masculinity within diplomatic contexts;

- Representations of gender in artistic and literary work connected with diplomacy;

- Material culture and gender in diplomatic exchange, such as gifts and ceremonial objects;

- Differences/similarities between the approaches of male/female sovereigns to foreign affairs;

- The body of the queen/king and its diplomatic value.

Presentations on any geographical area are most welcome. Abstracts of no more than 250 words should be sent to  earlymoderndiplomacy@torch.ox.ac.uk by 1 April 2018. Successful applicants will be notified by 20 April 2018.

A small registration fee (standard = £25; students = £10) will be charged to help towards the costs of lunch and refreshments. Travel expenses will not be reimbursed.