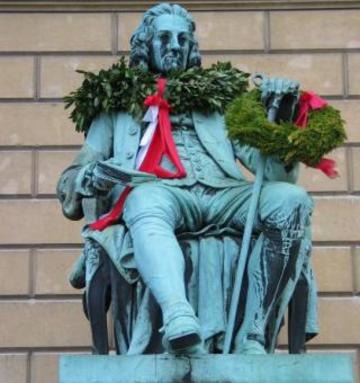 Within the urban and intellectual circles of Sweden towards the end of the nineteenth century, various forms of dandyism and aestheticism surfaced, creating a problematic relationship between writers and male members of the lower classes, who also indulged in dandyist performances. A heated debate on the vulgarity and excess of lower-class dandies permeated the popular press of 1890s Stockholm and the depictions of certain characters in the fiction of such writers as Strindberg and Söderberg. This paper discusses these various representations in connection to the popular culture of dandyism at the time, in order to identify notions of astheticism, class distinction and taste among the intellectual world of the late nineteenth century.

Dr Mikkel Zangenberg (University of Kent): "On the Politico-Aesthetic Education of a Nordic, Proto-European Welfare Man; or, how to mobilize Schiller anew, through reading Holberg’s Erasmus Montanus"

My rather ponderous, longish title attempts to articulate the drift of a reading of the deeply ambiguous negotiation of universalism versus egalitarianism in Danish-Norwegian Ludvig Holberg’s 1723 play, as well as the possible, contemporary political and aesthetic relevance for the (virtually shipwrecked) European project, of what we might provisionally name a Nordic Welfare Modernism avant la lettre. Underlying this brief, experimental investigation of the twists and turns of Holberg’s very Scandinavian notion of socio-political wisdom and justice, is an interest in revisiting Schiller’s post-revolutionary Über die Ästhetische Erziehung des Menschen in einer Reihe von Briefen (1795). With a view to reflecting further on how and why Holberg, and coincidentally other figures in contemporary Nordic literature might harbour lessons for a Europe torn between technocratic bureaucracy and rampant, populist nationalism. One of the challenges being an attempt to navigate between the Scylla of arid didacticism, and the Charybdis of a crude, politicized instrumentalization of art. In other, and more plain words: How to read Holberg’s Erasmus Montanus in 2016? And, can the aesthetics of Nordic welfare states help save Europe from dissolution?

All welcome, no registration required.