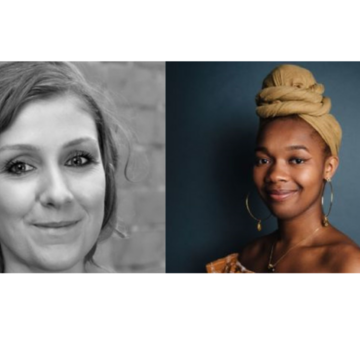 Join Oxford Playhouse for a virtual conversation between Ella Hickson and Jasmine Lee-Jones, two of British theatre’s most exciting and outspoken voices.

Ella Hickson is an award-winning playwright whose work has found audiences across the UK and abroad. Her most recent play, Swive, opened at Shakespeare's Globe in the autumn of 2019. Previously that year, Anna, played at The National Theatre. Oil opened at The Almeida Theatre in October 2017 and The Writer opened there in Spring 2018. Ella is a Fellow of the Royal Society of Literature and teaches Creative Writing at the University of Oxford.

Jasmine Lee-Jones is an actor and writer. Her first full-length play Seven Methods of Killing Kylie Jenner opened at The Royal Court in July 2019 and won the 2019 Evening Standard Award for Most Promising Playwright, the 2019 Alfred Fagon Award, and the European New Talent Drama Award 2020. She is currently under commission to the Royal Court Theatre, Soho Theatre, and Headlong Theatre and is adapting a major novel into a TV series for the BBC.

This event is part of an ongoing series organised by the Oxford Playhouse in collaboration with TORCH and the Cameron Mackintosh Fund for Contemporary Drama.