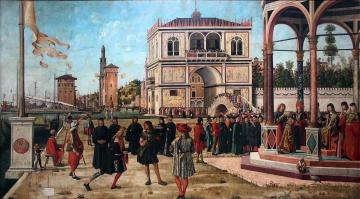 Diplomacy in the past decades has peremptorily resurfaced on the historians’ desk: after being defined in the 19th century as one of the backbones of the building of the nation-state, and being neglected in the second half of the 20th century as an inward-looking, all-political field, diplomatic history, renovated by cultural history and historical anthropology, is increasingly at the heart of a political history more attentive than ever to how social structures and cultural practices shape political interactions.

In such a context, my communication would focus on Italian diplomatic practice in the early Renaissance. Since the 19th century, Italian polities have provided excellent case-studies for the theory associating the beginnings of permanent diplomacy and the emergence of resident ambassadors with the process of state-building. However, in the last decades this grand narrative has been profoundly revisited. Multilayered communication and negotiation networks, information gathering, and letter-writing are at the heart of such a revision, and have been increasingly seen as the major features of a ‘new’ diplomacy based on the development of communication networks through which conflicts were dealt with by the way of multiple interactions in order to build legitimacy upon pragmatic reciprocal recognition.