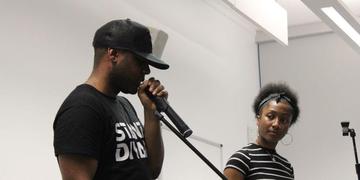 This event brings together three talented artists, Stanza Divan, Rupinder Kaur and Lady Sanity, who all use languages and word-play in different ways, to forge personal and collective identities through their art.

Stanza Divan is a London-born, Midlands-based hiphop artist. He recently released his first mixtape Poetry in Motion to much acclaim. “An artist who takes the craft of lyricism seriously, Leicester-based emcee Stanza Divan effectively showcases his skills on this highly-anticipated Poetry In Motion project, a well-rounded release mixing contemporary styles with traditional boom-bap flavour, solidifying the UK wordsmith’s position as a voice to pay attention to.” - Ryan Proctor’s Beats, Rhymes & Hip-Hop Nostalgia (Blog)

Lady Sanity is a Birmingham-born-and-bred rapper. She fuses the spirit of 90s HipHop, the heart of Jazz & the energy of Trap & Grime. Sanity picked up her first award as GRM Daily’s selected 2017 Get Rated winner; followed by receiving ‘Best Solo Female 2018’ at Birmingham’s 1st Music Award ceremony. Last year, Sanity was invited to perform at the closing ceremony of the Commonwealth Games 2018 in Australia, representing her hometown in front of an estimated 1 billion as her live performance was broadcasted across the world.

​Each artist will perform a selection of their work, followed by a Q&A with the public.

This public event forms part of a one-day academic workshop, Found in Translation – Bringing Russian and Punjabi Culture to British Stages, organised by the Strand 4 team of Creative Multilingualism.