Reading Beyond the Code: A Book at Lunchtime 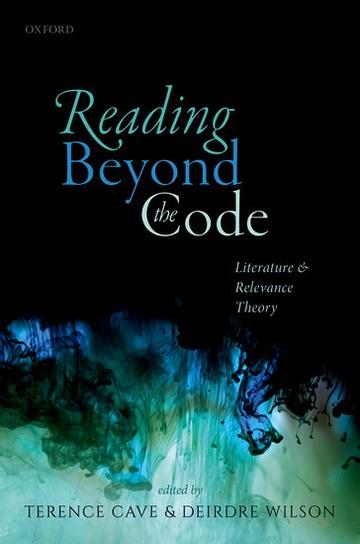 Is language a simple code, or is meaning conveyed as much by context, history, and speaker as by the arrangement of words and letters?

Relevance theory, described by Alastair Fowler in the LRB as 'nothing less than the makings of a radically new theory of communication, the first since Aristotle's', takes the latter view and offers a comprehensive understanding of language and communication grounded in evidence about the ways humans think and behave.

Reading Beyond the Code is the first book to explore the value for literary studies of relevance theory. Drawing on a wide range of examples—lyric poems by Yeats, Herrick, Heaney, Dickinson, and Mary Oliver, novels by Cervantes, Flaubert, Mark Twain, and Edith Wharton—nine of the ten essays are written by literary specialists and use relevance theory both as a broad framing perspective and as a resource for detailed analysis. The final essay, by Deirdre Wilson, co-founder (with Dan Sperber) of relevance theory, takes a retrospective view of the issues addressed by the volume and considers the implications of literary studies for cognitive approaches to communication.

Terence Cave is recognized as a leading specialist in French Renaissance literature, but has also made landmark contributions to comparative literature and the history of poetics. His most recent work focuses on cognitive approaches to literature.

Deirdre Wilson’s book Relevance: Communication and Cognition, co-written with Dan Sperber, was described in Rhetoric Society Quarterly as 'probably the best book you'll ever read on communication.' Translated into twelve languages, it has had a lasting influence in philosophy, psychology, and linguistics and is now regarded as a classic.

Terence and Deirdre will be joined an expert panel to discuss the book and its themes:

Booking is essential. Register via Eventbrite.

Part of Book at Lunchtime, a fortnightly series of bite sized book discussions, with commentators from a range of disciplines.