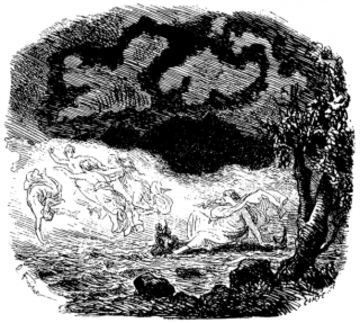 The Nordic countries have produced some of the world’s most famous fairy tale writers, from H.C. Andersen and Asbjørnsen and Moe through Selma Lagerlöf and Karen Blixen through Astrid Lindgren and Tove Jansson, not to mention Kay Rasmus Nielsen’s enduring illustrations of the Grimm stories.  In addition, writers in other genres have incorporated fairy tales and folklore into their works, such as Ibsen’s use of the Peer Gynt legend.  But “Fairy Tale” seems an inadequate translation of the Danish term “eventyr”, and signals a need for redefinition in light of new work by Marina Warner, Franco Moretti, Jack Zipes and other commentators on the genre.  This Nordic Network session will probe the relationship of fairy tale to folklore in the Nordic countries and explore individual writers.

There is no need to have read any fairy tales beforehand, though if you wish to read the two by H.C. Andersen that will be discussed by Paul Binding (Iisjomfruenand Dryaden) please feel free to do so.

There will be plenty of time for discussion and questions.

DAVID HOPKIN:  ‘The Soldier’s Tale: The Relationship of The Tinderbox to Oral Storytelling.’   Was the fairy tale derived from the oral folk tale, or is its history entirely literary?  Is it a demotic or a lettered genre?  In folkloristics this is a hot discussion at the moment.  H C Andersen claimed that most tales in his first (1835) published collection were rewritten versions of stories he had heard in his youth, but was this claim anything more than a nod to an established expectation of the form?  In this paper I explore the debate in relation to one of Andersen’s most famous tales, The Tinderbox, a version of international tale-type ATU 562, the first full version of which appeared in the second volume of the Grimms’ Kinder- und Hausmärchen (1815).   I will look at who might have told (as opposed to who wrote) this tale in the nineteenth century and why, and consider how this knowledge affects our appreciation of the tale’s character, its aesthetics and its value.

PAUL BINDING will explore H.C. Andersen’s Iisjomfruen, one of his greatest works, taking it as the apotheosis of a Nordic fairy-tale that is also a German/French Novelle, and a sort of template of Swiss history.  He will relate it to another Andersen fairy-tale, Dryaden, that again uses Nordic vocabulary and images for a different society - France, especially Paris at the time of the Exposition, on the eve of the Franco-Prussian War. Finally he will show how these stories, remarkable though they are, are in fact consistent with Andersen's intellectual and artistic preoccupations from the first.

LISE GRØNVOLD will consider how Karen Blixen reshaped the Nordic fairy tale in her “tales” published between 1934 and 1958. The tales are fantastical and experimental, but also quiet, dark and puzzling, and a single story can contain a quiet Englishman, the greatest opera singer in the world, a legendary African prince, and the French Revolution. Reading Blixen’s stories as “fairy tales” has had a problematic history, as reductive conceptions of the genre have contributed to anti-modernist and a-historical considerations of her work. However, if we instead examine how Blixen mixes the genre with other traditional and contemporary forms, we can see how her re-thinking of the Nordic dairy tale is essentially of her time.

Image: Illustration made for the fairy-tale Iisjomfruen by Hans Christian Andersen via Wikimedia Commons.