Subalternity and Byzantine Studies: Critically Imagining the Masses in History 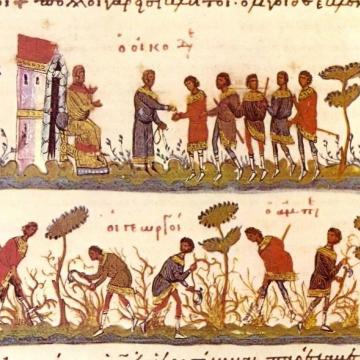 This webinar will outline the concept of subalternity as it has been developed in Marxist and postcolonial critical theory, as well as explore its potential for understanding the medieval empire of New Rome commonly known as Byzantium. First used in the Prison Notebooks of Italian revolutionary Marxist Antonio Gramsci, where it appears a broad term for exploited and dominated social classes, “subaltern” was subsequently developed into a rich but historically specific analytical concept by the Indian Subaltern Studies group. Diffusing from there into the extensive and varied literature known as Postcolonialism, subalternity has become one of the most widely used analytical terms for oppressed and excluded social categories across a broad range of disciplines. The workshop will be led by Nicholas Matheou (Institute of Historical Research, University of London), a comparative social historian specialising in the region of Anatolia, Upper Mesopotamia and Caucasia in the Middle Ages. It will open with a brief critical introduction to subalternity, with reference to current debates in Byzantine Studies, before turning to an open discussion of the recommended reading materials.

Attendance is open, but attendees are asked to read at least one of the three-asterisked readings, and more than one is strongly encouraged if time permits. Some questions to think on:

1. Problem of access: can the subaltern speak to us?
2. Problem of hegemonic translation: if the subaltern cannot speak in her own voice, can she speak even if we hear her words?
3. Problem of agency: is to be subaltern to be unable to act?
4. Problem of definition: on what basis is an actor or class of actors subaltern? Is it all those exploited, dominated or oppressed in some way, or does it require some extra level of systemic exclusion from hegemonic cultural and social forms?
5. Problem of methodology: if subaltern actors form historical dark matter, invisible in themselves but asserted in their activity structuring visible elite phenomena, how are we able to write the history of this fundamental role?

This event is run by the TORCH research network New Critical Approaches to the Byzantine World.

A key example of the broad sense in which Gramsci uses the term subaltern, in a note laying out his vision for writing a history of Italy’s formation as a nation-state, and the making of the Italian peasantry and proletariat.
***Gramsci, Antonio, ‘Some Aspects of the Southern Question’, in Quentin Hoare (ed.), Selections from Political Writings, 1921-1926 (1978), 41-462.
Central text for the later Subaltern Studies group, pointing in the direction that they would develop the concept of subalternity.
Webinar, Monday April 15th
***Guha, Ranajit Guha, ‘On Some Aspects of the Historiography of Colonial India’, in Vinayak Chaturvedi (ed.), Mapping Subaltern Studies and the Postcolonial (2000), 1-7.
The founding manifesto of Subaltern Studies, laying out its programme with reference to the history of colonial India, but relevant, mutatis mutandis, for all subaltern approaches to history.
***Spivak, Gayatri Chakravorty, ‘Can the Subaltern Speak?’, in Cary Nelson and Lawrence Grossberg (eds.), Marxism and the Interpretation of Culture (1988), 67-110.
Absolutely fundamental essay for the postcolonial development of the concept of subalternity, key also for thinking about positionality and methodology in “speaking for” subaltern actors and groups in general.
***Spivak, Gayatri Chakravorty, ‘Scattered Speculations on the Subaltern and the Popular’, in Postcolonial Studies, Vol. 8, No. 4 (2005), 475-486.
An overview of Spivak’s vision of the subaltern as it developed through Gramsci and Subaltern Studies
** Chaturvedi, Vinayak, ‘Introduction’, in ibidem (ed.), Mapping Subaltern Studies and the Postcolonial (2000), 1-7.
Overview essay of Subaltern Studies’ development, and its effect on Postcolonialism.
**Pandey, Gyanendra, ‘Voices from the Edge: The Struggle to Write Subaltern Histories’, in Vinayak Chaturvedi (ed.), Mapping Subaltern Studies and the Postcolonial (2000), 281-299.

Essay on the methodological use of “fragmentary” subaltern evidence, its empirical value, and real or apparent contradiction with more “total” forms of history writing.
**Scott, James C., ‘Hegemony and the Peasants’, in Politics & Society, Vol. 7, No. 3 (1977), 267-296.

Early article asserting the relative autonomy of agrarian subaltern imaginaries and culture from cultural and ideological hegemony, and so their key role in resistance to power.
**Scott, James C., Domination and the Arts of Resistance: Hidden Transcripts (1990), esp. chapters 1 ‘Behind the Official Story’ & 8 ‘A Saturnalia of Power: The First Public Declaration of the Hidden Transcript’.

Key work in Scott’s ongoing project to assert the power and potential of subaltern resistance, even as its modalities appear subdued and deferential.
*Arnold, David, ‘Gramsci and Peasant Subalternity in India’, in Vinayak Chaturvedi (ed.), Mapping Subaltern Studies and the Postcolonial (2000), 24-49.

Essay examining Gramsci’s own treatment of the peasantry, and the use of more specifically Gramscian frameworks in Indian subaltern studies.
*Chibber, Vivek, Postcolonial Theory and the Specter of Capital (2013).