The origins and characteristics of macro-nationalism 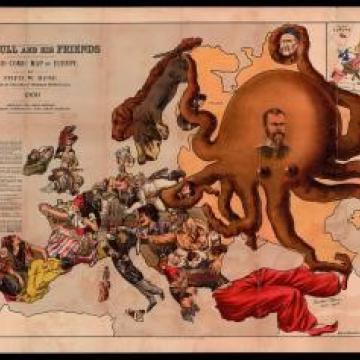 Pan-nationalist movements, which appeared across Europe in the late nineteenth century, were part of the “first globalisation” process. During that period, the new domination of a considerable part of the world by European powers, who controlled the global circulation of men and merchandise, gradually homogenised the planet politically and economically. In this context, the pan-movements placed nationalism on a scale larger than ever before: according to various cultural, linguistic, or “racial” criteria, the partisans of each macro-nationalist movement promoted projects of supra-national integration among all German-speaking, Slavic-speaking, or Romance-speaking countries. Proposing a conceptual framework for analysing this phenomenon, I will situate it within the broader history of nationalism, and underline the similarities and differences of pan-nationalism regarding the dominant model of nation-state nationalism. I will show how the pan-movements drew their constitutive elements from different phases in nineteenth-century nationalism, and insist on those movements’ crystallisation in a context marked by intensified armed conflicts and imperial rivalries. Focusing more specifically on the case of pan-Latinism, I will highlight the major role played by intellectual and political elites in the development of this ideology, while showing that its relevance to other social classes was anything but obvious.

Amotz Giladi received his PhD in Sociology at the Ecole des Hautes Etudes en Sciences Sociales (Paris). He has special interest in migratory intellectual trajectories, intercultural exchanges, and the relations between nationalism, trans-nationalism and pan-nationalism. He is the author of numerous articles on pan-Latinism, published in periodicals such as History: The Journal of the Historical Association, Journal of Romance Studies, and French Politics, Culture & Society.