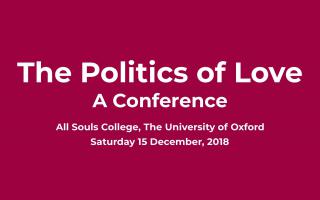 ‘Love’ has re-entered the political vocabulary in many societies around the world. There is greater talk of decolonial love; the 50th anniversary of the assassination of Martin Luther King, Jr., has led to a renewed discussion of his ideas of civic love; and liberal, religious, and socialist thinkers have continued to explore what love means in their different traditions.

We are bringing together thinkers and activists from diverse traditions to ask: what role, if any, should love play in politics? We will explore the concept of love and its implications for politics. We want to think through what love means, how love might bring about stronger societies, how it fits with anger and conflict, how it relates to various forms of oppression, and how we might realise the Politics of Love through activism, campaigning, and other kinds of political activity. The aim is to give love, and the Politics of Love, a stronger intellectual foundation in the hope that this will enhance the work of those individuals and groups seeking to realise love in their communities.

​Lynne Segal is Professor of Psychology & Gender Studies at the University of London. She has written on feminist theory and politics, and has been heavily engaged with grassroots activism in various spheres of progressive politics. She is the author of Radical Happiness: Moments of Collective Joy, as well as a number of other books, including Out of Time: The Pleasures and Perils of Ageing; Why Feminism: Gender, Psychology, Politics; and New Sexual Agendas.
www.bbk.ac.uk/psychosocial/our-staff/academic/lynne-segal

Lida Maxwell is Associate Professor of Political Science and Women’s, Gender, and Sexuality Studies at Boston University. She is the author of Public Trials: Burke, Zola, Arendt and the Politics of Lost Causes (Oxford, 2014), and is finishing a new book, Insurgent Truth: Chelsea Manning and the Politics of Outsider Truth-Telling. She is beginning on new project on environmentalism and the politics of love; her essay, “Queer/Love/Bird Extinction: Rachel Carson’s Silent Spring as Work of Love” was published in Political Theory in 2017.
https://www.bu.edu/polisci/people/faculty/lida-maxwell/

Jon Cruddas is a British Labour Party politician and Member of Parliament for Dagenham and Rainham. He has led and supported numerous community projects aimed at fostering a more socially-minded, people-driven community. He has previously taught Labour history at University College, Oxford.

Eva Kittay is Distinguished Professor Emerita of Philosophy at Stony Brook University/SUNY; a Senior Fellow of the Stony Brook Center for Medical Humanities, Compassionate Care and Bioethics, and an Affiliate of the Women's Studies Program. She is the recipient of a Guggenheim Fellowship. Her books include Metaphor: Its Cognitive Force and Linguistic Structure; Love's Labor: Essays on Women, Equality, and Dependency; Cognitive Disability and the Challenge to Moral Philosophy; The Blackwell Guide to Feminist Philosophy, and Theoretical Perspectives on Dependency and Women. Her forthcoming book, Learning From My Daughter: The Value and Care of Disabled Minds, will be published in 2019.
www.stonybrook.edu/commcms/philosophy/people/_faculty/kittay

Kim Stallwood is an animal rights advocate and theorist, who is an author, independent scholar, consultant, and speaker. He has more than 40 years of personal commitment as a vegan and professional experience in leadership positions with some of the world’s foremost animal advocacy organisations. He wrote Growl: Life Lessons, Hard Truths, and Bold Strategies from an Animal Advocate with a Foreword by Brian May (Lantern Books, 2014). He became a vegetarian in 1974 after working in a chicken slaughterhouse. He has been a vegan since 1976.
​www.kimstallwood.com

Ruth Armstrong is a British Academy Post Doctoral Fellow and Senior Research Associate at the Institute of Criminology at the University of Cambridge. Ruth has conducted research internationally and in the UK on different aspects of life in prison and post release, especially focusing on the individual and social aspects of routes out of crime. She and Amy Ludlow have designed and are delivering and evaluating an educational initiative called Learning Together - an initiative that builds learning communities that span prison and university walls. Their work is yielding new research insights about the role of dialogic, communal learning in supporting movements away from crime.

Amy Ludlow is Director of the MSt Programme in Criminology, Penology and Management and a Senior Research Associate at the Institute of Criminology, and an Affiliated Lecturer at the Faculty of Law at the University of Cambridge. Amy has conducted wide-ranging research in prisons, focussing especially on how organisational reforms in the sector, particularly marketisation and privatisation, affect prison staff culture and quality of life for staff and prisoners. She and Ruth Armstrong have designed and are delivering and evaluating an educational initiative called Learning Together - an initiative that builds learning communities that span prison and university walls. Their work is yielding new research insights about the role of dialogic, communal learning in supporting movements away from crime.

Kathleen Lynch is an academic and activist. She is Professor of Equality Studies at University College Dublin. She helped to establish the UCD Equality Studies Centre and the UCD School of Social Justice. She has co-authored several books, including New Managerialism in Education: Commercialization, Carelessness and Gender; Equality: From Theory to Action; and Affective Equality: Love, Care and Injustice.
https://people.ucd.ie/kathleen.lynch

Kehinde Andrews is an academic, activist, and author. He is Professor of Black Studies at Birmingham City University. He has written Back to Black: Retelling Black Radicalism for the 21st Century, and Resisting Racism: Race, Inequality and the Black Supplementary School Movement. He is director of the Centre for Critical Social Research, founder of the Harambee Organisation of Black Unity, and co-chair of the Black Studies Association.
https://www.bcu.ac.uk/social-sciences/about-us/staff/kehinde-andrews

Roman Krznaric is a social philosopher whose books, including Empathy, The Wonderbox, Carpe Diem Regained and How to Find Fulfilling Work, have been published in more than 20 languages. He is also the founder of the world’s first Empathy Museum and of the digital Empathy Library. He is currently a Research Fellow of the Long Now Foundation in San Francisco, and a Research Associate at the Design Against Crime Research Centre at Central Saint Martins college of art and design in London. Roman has degrees from the universities of Oxford, London and Essex, where he obtained his PhD in political sociology.
www.romankrznaric.com

Max Harris is an Examination Fellow at All Souls College, Oxford. Originally from Aotearoa New Zealand, he is the author of The New Zealand Project and has written about various topics in progressive politics for outlets such as Aeon, Novara Media, and openDemocracy.

Philip McKibbin is a writer from Aotearoa New Zealand. He has published with The Guardian, Impolitikal, and Takahē. He holds a Master of Arts in Philosophy from The University of Auckland, and is studying te reo Māori at Te Wānanga o Aotearoa. His book, Love Notes: for a Politics of Love, will be published by Lantern Books in 2019.

Max Harris and Philip McKibbin first wrote about the Politics of Love in 2015: https://theaotearoaproject.wordpress.com/2015/05/20/the-politics-of-love-max-harris-and-philip-mckibbin/.

​We are grateful to All Souls College, The Oxford Research Centre in the Humanities (TORCH)​, and The Borrin Foundation​ for funding for this conference.