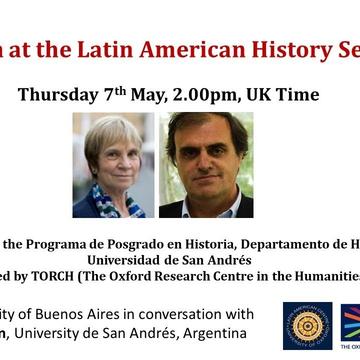 Online event.  Further details regarding online platform to be announced

Hilda Sabato completed her BA in History at the University of  Buenos Aires (UBA) and her PhD at the University of London.  She is head-researcher of CONICET at the Program PEHESA of the Instituto Ravignani-UBA and was formerly History professor at the Facultad de Filosofía y Letras-UBA (1984-2013). She was vice-president of the International Committee of Historical Sciences (ICHS/CISH) from 2010 to 2015, and has been fellow and visiting professor in various academic institutions around the world. In 2012, she was awarded the Alexander von Humboldt prize for her research trajectory. Her latest book Republics of the New World. The Revolutionary Political Experiment in Nineteenth Century Latin America was published in 2018 by Princeton University Press.

Eduardo Zimmermann received a Law Degree from the University of Buenos Aires and a D.Phil in Modern History from the University of Oxford. He has been a Junior Research Fellow at the Institute of Latin American Studies, University of London; a Visiting Fellow at the Kellogg Institute, University of Notre Dame, a Visiting Professor at the Department of History, Paris I, Panthéon-Sorbonne, and an Edward Larocque Tinker Visiting Professor at Columbia University. He was awarded the Premio Ensayo Histórico La Nación 120 Aniversario, Buenos Aires, and is a fellow of the Argentine National Academy of History. He is currently Associate Professor at Universidad de San Andrés, Buenos Aires. His research focuses on 19th- and 20th -century Latin American history, particularly on state building processes, legal and political history, and the history of political thought in the region.