TORCH Presents: Life and Death at the Offbeat Festival 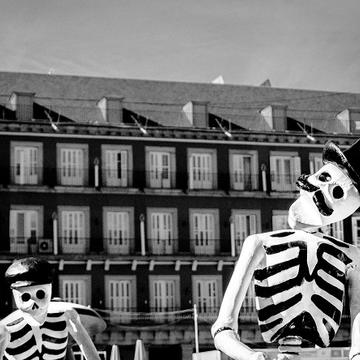 Join four Oxford University researchers for a night of extracurricular entertainment as they explore life’s big questions though drama, comedy and live music!

Only 1% of Oxford’s food is estimated to come from local direct sources, and yet when we sit down for a home cooked meal – we don’t tend to think of it as exotic. Come and experience local dining at a mock Oxford college high table and together let’s see if we can  figure out why certain plants are categorised as  native, exotic or even invasive alien species.

JC Niala is a researcher who tells stories on the stage, screen and by podcast. Her award-winning work is an invitation to experience the world in unexpected ways and is most often accompanied by delicious food.

Comedy with Deborah Cameron and Will Watson!

Deborah Cameron has a secret: when not busy with her day job as an academic, she rules the English language. Or at least, there are people all over the world who think she does, and who want her to use her superpowers to settle their long-running disputes, promote their crackpot theories and battle the abuses that are dragging down the language of Shakespeare. In her performance she recalls some of her encounters with these people--and her (usually unsuccessful) attempts to persuade them that while language is important, it's not a matter of life and death.

Deborah Cameron is Oxford's Professor of Language and Communication, based in the Faculties of Linguistics and English. As well as teaching and doing research, she regularly writes, broadcasts, blogs and tweets about language and linguistics for a wider public. Ten years ago she discovered the joys of stand-up comedy, and she has since performed in pubs, at the Bright Club, after conference dinners and on one occasion when they couldn't get anyone famous, at a copyeditors' banquet.

Will Watson fled from training as a cardiologist in Cambridge with just a Membership of the Royal College of Physicians in his back pocket to seek fame and fortune in Oxford. After listening to a few research project pitches, he deliberately chose the one that made the least sense to him (he likes a challenge) and currently spends his days persuading people to lie in an MRI scanner while he feeds their hearts sugar to make them work better.

To try and make it all less confusing, Will is going to try and explain how it all works through the medium of a comedy set where he describes the world of research, weak hearts and strong magnetic fields.

Paul Lodge, Professor of Philosophy and Fellow of Mansfield College, will be playing a selection of songs from the project Cantat Ergo Sumus with the help of local heroes Flights of Helios (https://flightsofhelios.co.uk/).

Cantat Ergo Sumus is an ongoing project that combines Paul’s interests in philosophy and music. It comprises original settings of philosophical poems. His show will feature performances of:

For more on Paul's philosophy and music, see: www.paullodge.com