“War Criminals I have known” – On making humanitarian action in today’s world multilateral, legitimate and safe

A Film Journey and Conversation with Experts hosted by Arezou Azad 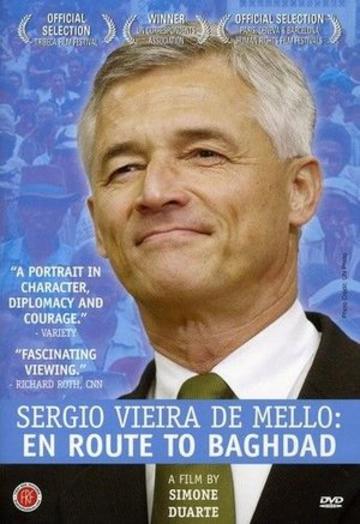 Humanitarian action in today’s world has been marred bythreats to multilateralism, inclusivity, and most recently, the Covid-19 pandemic. How can we meet the major humanitarian challenges that people in conflict zones today face? Lessons need to be learned; new paths forged. In this Live YouTube event, Arezou Azad takes us on a journey to (re-)discover one man who manoevred competing interests in conflict zones in the interest of humanitarianism with a skill that has been unparalleled: Sergio Vieira de Mello, who paid the ultimate sacrifice when he and 21 humanitarian colleagues were killed in an al-Qa’ida attack on a UN building in Iraq 17 years ago. Dr Azad will be joined by four expert guests, who have drawn inspiration from the film “En Route to Baghdad” (2005). They will show, and comment on, snippets of the film that can help us navigate these uncertain times.

Topics addressed by individual experts in the Live event include:

Dr Arezou Azad is Senior Research Fellow at the Oriental Institute, Oxford University, and Humboldt Fellow at Freie University Berlin. She is currently researching the history of multiculturalism in the lands of Islam (notably, Iran, Afghanistan, and Central Asia). She is Principal Investigator of Oxford’s “Invisible East” programme funded by the European Research Council and Arts and Humanities Research Council. Dr Azad was previously Lecturer in Medieval History at the University of Birmingham, and taught at the School of Oriental and African Studies. From 1996-2005, she worked on political and policy briefs at the UN Department of Peacekeeping Operations at headquarters and in field missions in Bosnia-Herzegovina and East Timor. Dr Azad has published numerous articles, a handbook, and academic books, Sacred Landscape in Medieval Afghanistan (Oxford University Press, 2013) and The Merits of Balkh (Gibb Memorial Trust, 2021).

Beginning her career as a humanitarian aid practitioner, Abby Stoddard worked in headquarters and field positions at CARE USA and later served as Programme Director for Doctors of the World (Médecins du Monde-USA). Her areas of expertise include humanitarian operational security and risk management, financing, coordination, and institutional reform. She is the author of Humanitarian Alert: NGO Information and its Impact on US Foreign Policy (Kumarian Press, 2006) and Necessary Risks: Professional Humanitarianism and Violence Against Aid Workers (Palgrave Macmillan, 2020), along with many articles, reports, and book chapters on humanitarian action.

Dr Emanuela-Chiara Gillard is a Senior Research Fellow at the Oxford Institute for Ethics, Law and Armed Conflict and an Associate Fellow in Chatham House’s International Law Programme. From 2007-2012 she was Chief of Protection of Civilians Section in the United Nations Office for Coordination of Humanitarian Affairs. Prior to this, Emanuela was legal adviser at the International Committee of the Red Cross where she was responsible for providing advice on the protection of civilians in armed conflict, children, assistance, multinational forces, civil/military relations, occupation and private military/security companies. Before this, Emanuela was legal adviser at the United Nations Compensation Commission, in charge of government claims for losses arising from Iraq’s invasion and occupation of Kuwait. She holds a B.A. in Law and an LL.M. from Cambridge. She is a Solicitor of the Supreme Court of England and Wales.

Dr Elisabeth Kendall is Senior Research Fellow in Arabic and Islamic Studies at Pembroke College, Oxford University.  Her current work examines how militant jihad movements exploit traditional Arab culture(s) and local dynamics. Previously, she held positions at the Universities of Edinburgh and Harvard, as well as serving as Director of a UK government sponsored Center focused on building Arabic expertise. For the past seven years, she has acted as international advisor (pro-bono) to a cross-tribal group in east Yemen that promotes community cohesion as a counterweight to al-Qa’ida and ISIS. She is also Chairman of a grass-roots NGO in Yemen’s Mahra governorate. She is the author or (co-) editor of several books, including ReClaiming Islamic Tradition (2016), Twenty-First Century Jihad (2015) and Literature, Journalism and the Avant-Garde: Intersection in Egypt (2006). She conceived of and edits the “Essential Middle Eastern Vocabularies” series, which includes the following titles which she also authored: Diplomacy Arabic, Intelligence Arabic and Media Arabic. She is currently working on a new book called Rock Stars of Jihad.

Simone Duarte is a Brazilian journalist whose credits include a 2002 Emmy nomination for the news coverage of the 9/11 attacks and a 2001 Honorable Mention from the United Nations Correspondents Association for her television series on East Timor. She was the New York News Bureau chief of TV Globo, the main network in South America and has 25 years of experience as a television producer, writer,  correspondent and in the last 10 years as online editor in chief of newspapers. In 1999, Duarte worked for the United Nations in East Timor in the early days of Sergio Vieira de Mello's administration. Her first short documentary, Archivo de la Identidad (2002), about the children who disappeared during the dictatorship in Argentina, has been featured in human rights film festivals around the world, including the Amnesty International Film Festival in the United States, and was acquired by Brazilian television. “En Route to Baghdad” was the Winner of the Siver Medal Award by the UN Correspondents Association in 2004. Duarte has a degree in communications from Universidade Federal do Rio de Janeiro and has a master’s degree in International Affairs from The New School in New York City. She is an Eisenhower Fellow, and currently lives in Lisbon and is writing a book on the consequences of the 9/11 attacks on the lives of people in Afghanistan, Pakistan and Iraq.

The event is held on the eve of Human Rights Day to honour the sacrifices that humanitarians around the world make, and to contribute to their aims.