Writing and Resistance – The White Rose Pamphlets: A Live Reading 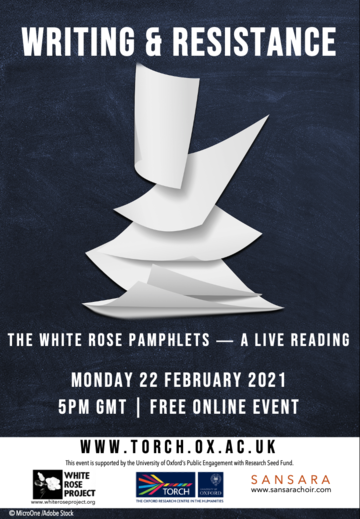 Supported by TORCH as part of the Humanities Cultural Programme

Writing and Resistance – The White Rose Pamphlets: A Live Reading

At around 11am on Thursday 18 February 1943 two students in Munich were arrested for distributing anti-Nazi pamphlets. By Monday they had been interrogated, tried, and executed along with another member of the resistance circle. Further arrests followed. From 15-27 February 2021 the White Rose Project will be following the events as they happened in real time through daily posts on Twitter, Facebook, and Instagram. This year marks the 78th anniversary of the first White Rose trials. It’s also a year when the dates and days of the week coincide. Imagine going about your normal routine on Monday, being arrested on Thursday, being interrogated over the weekend, and going to trial the following Monday morning.

At the heart of our week is a live reading of the White Rose’s resistance pamphlets, translated from German into English by student members of the White Rose Project. Dr Alex Lloyd (Fellow by Special Election in German, St Edmund Hall) will give a short introduction to the pamphlets. The readers are current and former students and academics, mirroring the membership of the original group: Sophie Caws, Eve Mason, Adam Rebick, Elba Slamecka, Sam Thompson, Amy Wilkinson, and Taylor Professor Emeritus of German Language and Literature, T.J. (Jim) Reed, FBA. The event will open and close with music by the award-winning vocal ensemble SANSARA, recorded on 22 February 2020. This event is supported by The Oxford Research Centre in the Humanities (TORCH) and the University of Oxford’s Public Engagement with Research Seed Fund. It is part of the White Rose Project, a research and public engagement initiative bringing the story of the White Rose resistance circle to English-speaking audiences. 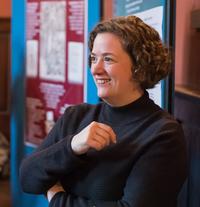 Dr Alexandra Lloyd is Fellow by Special Election in German at St Edmund Hall, Oxford. She has published widely on post-war Germany, most recently in her book Childhood, Memory, and the Nation: Young Lives under Nazism in Contemporary German Culture (Legenda, 2020). She is currently a Knowledge Exchange Fellow at TORCH working with the White Rose Foundation in Munich, and is Project Lead on a Public Engagement with Research Seed Fund project, ‘Resistance: The Story of the White Rose’, in collaboration with the award-winning vocal ensemble SANSARA.

For more information on this project please visit: https://whiteroseproject.org/