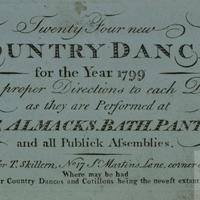 Working with EFDSS (the English Folk Dance and Song Society), I will use the historical sources in their archive to define an 'English' repertoire for the eighteenth century. In the eighteenth century, the proliferation of Scottish, Irish, and Welsh 'national music' was not matched by publications of 'English' repertoire - yet plenty of music was published and shared in England. The lack of the national label in English publications of this time has often led to it being said that England was a 'land without music' in the eighteenth century - but the sheer quantity of printed tunebooks and tune collections, and the copying out and sharing of this material in manuscript sources, proves otherwise.

Using around 160 printed tune collections from the eighteenth century, I will create a database of their contents, alongside publication data such as date and location. This will enable statistical analysis of a large enough dataset to identify significant patterns. It will be possible, for example, to find the most common tunes across England, the most common tunes in particular regions, and to track the spread of these tunes around the country over time as they were reprinted elsewhere. The result will be the first ever description of the 'national music' of England in the eighteenth century, comparable to the better known bodies of repertoire associated with Scotland, Ireland, and Wales in the same period.