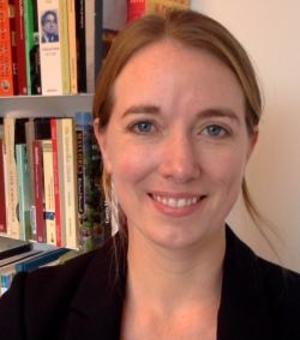 I spent the first ten years of my life in Colombia, South America, where I attended a bilingual school and learned something about living between two languages and cultures. I went on to read French and Spanish at Oxford, teaching both languages in secondary schools before taking a doctorate in Spanish at the University of Birmingham, where I also studied some Catalan. I now teach modern Peninsular literature at Oxford, and I am also Director of Schools Liaison and Outreach for the Faculty of Medieval and Modern Languages.

As a linguist and literary scholar, the influence of more than one language on cultural identity and literary expression has always been an area of interest to me, and began to develop during the course of writing my doctoral thesis on the Spanish-speaking Catalan author Esther Tusquets. It was further developed by research into authors exiled in the wake of the Spanish civil war and, since taking up my associate professorship at The Queen’s College, which hosts the John Rutherford Centre for Galician Studies, by my critical work on and translation of the Galician dramatist Ramón del Valle-Inclán. Since 2013 I have been working on the relationship between multilingualism and modernity in twentieth-century literature of the Spanish-speaking world, and have a monograph forthcoming with Palgrave Macmillan (Multilingualism and Modernity: Barbarisms in Spanish and American Literature). I am ​​also co-editor of the Routledge Companion to Iberian Studies, which promotes a comparative approach to the multilingual cultures of the Iberian peninsula.

I am very much looking forward to working with the Co-Investigators of the World Literatures strand of this project, Jane Hiddleston and Wen-chin Ouyang, and with our partner school in Hackney. It will be a wonderful opportunity to open up and explore new directions in this area.