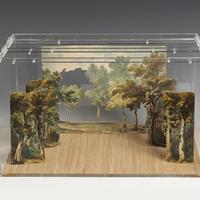 18th-century theatre thrilled audiences with special effects and spectacular experiences, much like the CGI cinema and video games of today. But research into such historical spectacular media and performance is frustrated by the overwhelmingly textual nature of what survives in the theatre archive. This project looks to 21st-century digital technology to address this problem. Collaborating with KE partner Arcade Ltd -- a company who specialise in creating immerse, narrative experiences using virtual reality and augmented reality -- we will digitally reconstruct three sets from one of the 18th-century's most popular and spectacular pantomimes: 'Omai, or A Trip Around the World', which was first performed at Covent Garden Theatre in London in 1785.

The aim of this project will be to explore ways of allowing people today (including researchers, teachers, students, and the public) to experience the colossal scale, complexity, and visual magnificence of an 18th-century theatre sets. Using surviving set models for 'Omai' - constructed by pioneering scenographer Philip James de Loutherbourg - and taking the stage of Bristol Old Vic (which opened in 1766) as a template for an 18th-century performance space, we will produce a beta-version of a smartphone app that allows users to see and interact with an augmented reality reconstruction of the pantomime sets, along with a walkthrough video of these scenes for classroom use.

This fellowship project will establish the collaborative relationship and practices and also the technological tools that will provide a platform for the next phase of this project, which will involve further development of the smartphone app to include the appearance of pantomime characters interacting with the scenery - and possibly the user. In its interfacing of state-of-the-art visual technology of today with state-of-the-art visual technology of the 18th-century, this project has the potential to change how we think about, study, and teach 18th-century theatre.