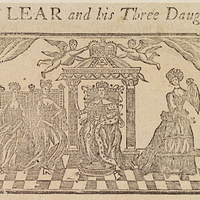 Knowledge Exchange Fellow:
Professor Tiffany Stern   (no longer at the University of Oxford)

In the Restoration period, Shakespeare’s King Lear was described as ‘a Heap of Jewels, unstrung and unpolisht’ by Nahum Tate. He adapted the play in 1681, turning it into a ‘romance’ in which Lear lives, Cordelia marries Edgar, and only bad people die. His version replaced Shakespeare’s until well into the Victorian period. Tiffany Stern has been collaborating with the Austin based theatre company Hidden Room Theatre to stage an ‘original performance’ (‘o.p.’) production of Nahum Tate’s 1681 King Lear.

Tiffany Stern's role was to supply information and advice about Restoration production so that we can see Tate’s Lear performed in its own right, rather than as a ‘lesser’ version of Shakespeare’s play. How have Restoration aesthetics informed our own? What can theatrical practice that is not Shakespearean tell us about our own habits of adaptation? Seeing one of Shakespeare’s most popular plays in its historically most popular form will supply some of the answers. Hidden Room's production, re-establishing late seventeenth century methods,  showed a different, forgotten form of acting; a different, forgotten form of Lear — and by extension, gave us a new way of thinking about both.