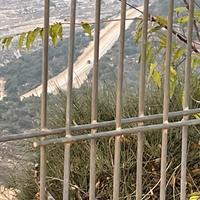 'Whose Paradise: The Highways of Jerusalem'

Through an autoethnographic lens, this new research project is prompted by William Blake’s iconic hymn Jerusalem; as much a city as an emblem of a dystopic paradise.

I plan to investigate how several highways in and around Jerusalem, operate and function in relation to movement, segregation, and accesses. Highway 1, Route 4370, and Tunnels Highway are roads that expose demographic power-structures in relation to religion, ethnicity, nationality and gender.

Growing up in Jerusalem, moving, passing and crossing confined zones that included Orthodox Jewish Ghettos and Palestinian neighborhoods, I was somatically aware of my teenage, gendered body within the privileged wider context of my secular national-ethnic identity. Those early lived experiences have later led to bodies of works, where I portrayed male personas that fictionally and critically explored my heritage.

My father and his siblings were born to a small minority of Jews who lived continuously in the Muslim Quarter in Old Jerusalem, what I consider to be Palestinian Jews. My maternal Orthodox Jewish family lived in the ultrareligious Jewish parts of the city. I aspire to embody a contemporary voice that recalls the nuances of my ancestry and speaks to a Semitic regional identity that partly resides in the imaginary.

Whose Paradise will feed anew - intersectional genderqueer feminist reflections - into Blake’s metaphysical vision of Jerusalem by graphically combining images and text of the Highways with aspects of my (now) ageing non-binary body in a new series of collages and a short new film. The work is commissioned and produced in association with KW, Berlin.