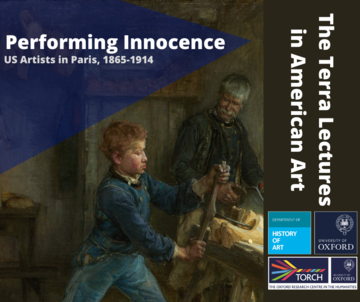 TORCH is supporting the Terra Lectures in American Art for the second year running. This year, Emily C. Burns, Terra Foundation Visiting Professor in American Art, will speak on the subject of 'Performing Innocence: US Artists in Paris, 1865 - 1914.'

The series of four lectures will see Professor Burns explore how Americans in Paris performed a cultural immaturity that pandered to European expectations that the United States lacked history, tradition, and culture.

The lectures will be broadcast live on the TORCH YouTube, with the recordings available at the same links afterwards.

The series starts on Wednesday 17th February at 5pm (GMT) with 'Belated'. Here, Professor Burns will explore how concepts like 'innocence' emerged and expanded at the end of the US civil war and how the impossibility of innocence gave the myth its urgency and paradox. Watch here.

Wednesday 24th February, 5pm, will see 'Puritan'. This lecture analyzes how Americans and US institutions in Paris adopted the ideal of the Puritan as a symbol of their sustained connection with the United States and a protective armor from becoming absorbed into Parisian decadence. Professor Burns will discuss works by Julius LeBlanc Stewart, Cecilia Beaux, Augustus St. Gaudens, and Jean André Castaigne. Watch here.

On Wednesday 3rd March at 5pm, Professor Burns explores the contrasting representations of Black identity as Primitive/Incipient between the American Art Association of Paris and the displays of Blackness curated by Black intellectuals in the “Exhibit of American Negroes”. Watch here.

The final lecture on Wednesday 10th March, 5pm, will take the idea of America as Baby Nation to analyze how US artists in Paris took up the child as a motif and mantra that reinforced or rejected the narrative of French artistic parentage. Professor Burns will explore the works of Edwin Blashfield, Henry Ossawa Tanner, Mary Cassatt, Cecilia Beaux, and Ellen Emmet Rand. Watch here.

You can find out more about Professor Emily C. Burns here, or watch last year's Terra Lectures by Professor Amy M. Mooney on 'Regarding the Portrait' here.