Book at Lunchtime with Cleo-Hanaway Oakley 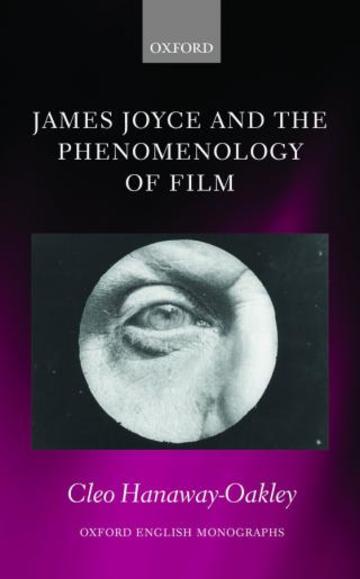 James Joyce and the Phenomenology of Film reappraises the lines of influence said to exist between Joyce's writing and early cinema and provides an alternative to previous psychoanalytic readings of Joyce and film. Through a compelling combination of historical research and critical analysis, Cleo Hanaway-Oakley demonstrates that Joyce, early film-makers, and phenomenologists (Maurice Merleau-Ponty, in particular) share a common enterprise: all are concerned with showing, rather than explaining, the 'inherence of the self in the world'. Instead of portraying an objective, neutral world, bereft of human input, Joyce, the film-makers, and the phenomenologists present embodied, conscious engagement with the environment and others: they are interested in the world-as-it-is-lived and transcend the seemingly-rigid binaries of seer/seen, subject/object, absorptive/theatrical, and personal/impersonal. This book re-evaluates the history of body- and spectator-focused film theories, placing Merleau-Ponty at the centre of the discussion, and considers the ways in which Joyce may have encountered such theories. In a wealth of close analyses, Joyce's fiction is read alongside the work of early film-makers such as Charlie Chaplin, Georges Méliès, and Mitchell and Kenyon, and in relation to the philosophical dimensions of early-cinematic devices such as the Mutoscope, the stereoscope, and the panorama. By putting Joyce's literary work—Ulysses above all—into dialogue with both early cinema and phenomenology, this book elucidates and enlivens literature, film, and philosophy.

Author Cleo Hanaway Oakley (Oxford Phenomenology Network, University of Oxford) will discuss the book and its themes with an expert panel:

This event will be chaired by Jeri Johnson (English, University of Oxford).

Lunch will be available from 12.30pm. Discussion from 1-2pm.

Booking is essential. Please register here for your seat.

Part of Book at Lunchtime, a fortnightly series of bite sized book discussions, with commentators from a range of disciplines.

Media: James Joyce and the Phenomenology of Film